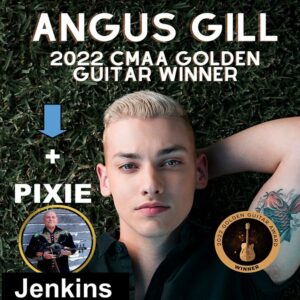 With 4 critically acclaimed studio albums, 5x #1 radio singles, a Golden Guitar Award, a #1 ARIA Australian Country Album and an ARIA Awards nomination under his belt, Angus Gill is one of the most exciting and prodigious acts on the Australian Country Music scene. He’s not only a musical chameleon, a gifted producer, a songwriter’s songwriter and a consumable performer, he’s also a comedian with a natural, dry sense of humour. Gill is one of the youngest Australians to have performed on the Grand Ole Opry in Nashville TN, alongside Nashville TV star, singer/songwriter Charles Esten. Gill has been delighting audiences with his distinctive voice, razor sharp wit and showmanship for over 15 years. In addition to his critically acclaimed fourth studio album The Scrapbook, he has released 2 solo albums Nomad & Welcome To My Heart, as well as 3 Minute Movies, a collaboration record with the members of Paul Kelly’s band, dubbed as Seasons of Change. Gill was nominated for an ARIA Award for his work with Melbourne comedy legend Bev Killick in 2020 and won his first Golden Guitar Award in 2022 for Bush Ballad of the Year, for his song The Easy Way, co-written with Manfred Vijars. “Angus Gill is a brilliant young singer/songwriter and if you want to be throughly entertained, you’ll go and see his show.” – Ray Hadley OAM (Legendary Radio Broadcaster 2GB). “Angus Gill is a breath of fresh air and a future bronze statue in Australian Country Music.” - John Williamson OAM (Australian Country Music Legend). PIXIE JENKINS Pixie’s fiddle playing is uniquely Australian, and with his amazing energy, story telling and humour, he has become one of the most recognisable artists in the industry.  He’s also one of Australia’s most eclectic and talented entertainers, playing roots, bluegrass and Irish folk styles with an incredible dexterity and finesse. Pixie has been a support artist and toured and recorded for some of the biggest names in the world, Bob Dylan to Cher; Jimmy Barnes to John Williamson and has been a studio musician on the recordings of 100s of other artists. “Alongside Slim Dusty, Chad Morgan and Jimmy Little, Pixie is an icon in Australian Country Music” - The Australian “Pixie is a wizard in the dying art of entertaining people” - Allan Caswell